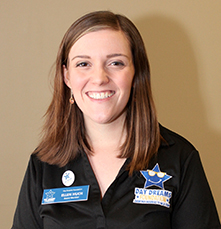 Ellen is from St. Louis and moved to Columbia in 2010 to attend the University of Missouri, where she received a bachelors in Human Development and Family Studies. She currently works as a Family Resource Specialst with First Chance for Children, and is finishing a masters degree in social work. Her favorite extracurricular activity as a child was taking piano lessons, which she did from ages 7-18. She also attended YMCA Camp Lakewood, where she later worked as a counselor. She has been involved with Day Dreams since its beginnings in 2014, and has served as a program committee member and the board secretary. She has been married to Joe Bradley since July 2016.

Our DREAM BIG PLEDGE ends on 10/8 - make your dona

A laugh for your #MotivationMonday, courtesy of 6-

Have you been to all three @hockman_interiors shop

Join me in wishing Sirr, our latest scholarship re